The Banker’s 2018 Top 100 African banks ranking offers a relatively encouraging healthcheck of the continent’s largest banks. Though this year’s results are far from stellar, they nonetheless point to an upward trajectory according to most key performance metrics.

This is notable because the review period, 2016, was far from rosy for the continent as a whole. Economic growth across sub-Saharan Africa over this period was just 1.3%, as regional governments battled the fallout from collapsing commodity prices and currency volatility. The data for the 2018 rankings shows that, among other things, African lenders are beginning to adapt to these conditions.

The total assets for the continent’s top 100 lenders hit $1.11bn at the end of the review period, while asset growth just made it into positive territory at 0.1%. This was a marked improvement from the 2017 ranking when assets contracted by 7.38%. Meanwhile, the aggregate return on assets remained essentially the same year on year at 2.13%. Perhaps most encouragingly, African lenders managed to bolster their Tier 1 capital positions by 2% over the review period. This compares with an 8% contraction in Tier 1 capital in the 2017 edition.

The distribution of this Tier 1 capital growth is also notable. The top 10 banks ranked by increases to their Tier 1 capital hail from seven different markets: Algeria, Egypt, Ethiopia, Ghana, Kenya, South Africa and Sudan. The highest mover in this table was Standard Chartered Bank of Ghana, which saw a 39% increase to $144m, while two Egyptian lenders, National Bank of Egypt and Afreximbank, came in at second and third, respectively.

Indeed, with the exception of Nigeria, most of Africa’s biggest banking markets registered strong improvements to their aggregate Tier 1 capital positions. South Africa and Kenya, for instance, each saw their market-wide Tier 1 capital increase by 15.7% and 14.6%, respectively. This is significant because these jurisdictions boasted a combined contribution of 18 lenders to this year’s ranking.

Meanwhile, aggregate pre-tax profit growth was flat in the profitability stakes. However, this marks a significant improvement from the 2017 edition when pre-tax profits contracted by 9%. The big-hitting markets in the 2018 ranking include Ghana, which saw pre-tax profits increase by 26%; Angola with 22% growth; Tunisia with 18% growth; and Mauritius, which saw market-wide profits jump by 16%. In all, pre-tax profit growth is heading in the right direction. This more or less mirrors the economic performance of the continent as a whole.

But while this year-on-year profitability growth was strong, not all markets fared so well by return on assets (ROA). South Africa, at 1.97%, and Mauritius at 1.83%, both fell below the 2018 Top 100 average of 2.13%. It was a similar story for Tunisia, Algeria and Morocco which all had an ROA of below 2%. In terms of success, Ghana, Mozambique, Kenya and Botswana all enjoyed ROAs of well above 3%.

The 2018 rankings have also not been immune from the impact of volatile currency movements. Nigerian banks have been hit particularly hard due in part to the Central Bank of Nigeria’s decision to scrap the naira’s dollar peg midway through the review period. As a result of this move, the naira lost close to one-third of its value against the dollar.

Nigerian lenders have suffered in the ranking as a result. Assets contracted by 24%, while pre tax profits fell by 19.6%. Tier 1 capital, meanwhile, reduced by 28.7%. These have undoubtedly been tougher times for many Nigerian banks as the domestic economy has faltered. But the extent to which their performance in the 2018 ranking can be linked to the naira’s devaluation against the dollar is significant.

In terms of the overall ranking, there have been a few changes in the top 10 banks by Tier 1 capital. The National Bank of Egypt, for instance, has climbed from 10th in the 2017 edition to sixth place in 2018. Nigeria’s Zenith Bank, at eighth in the previous edition, has fallen to 11th place. Outside of the top 10, another notable jump has come from Egypt’s Afreximbank, which has risen to 15th from 19th in the 2017 edition.

With economic growth improving across the continent – it hit 2.4% in 2017 and is expected to improve to 3.2% in 2018, according to the World Bank – the outlook for Africa’s lenders is certainly rosier. As currency and commodity volatility gradually subsides, a stronger banking system is likely to emerge for The Banker’s2019 ranking. 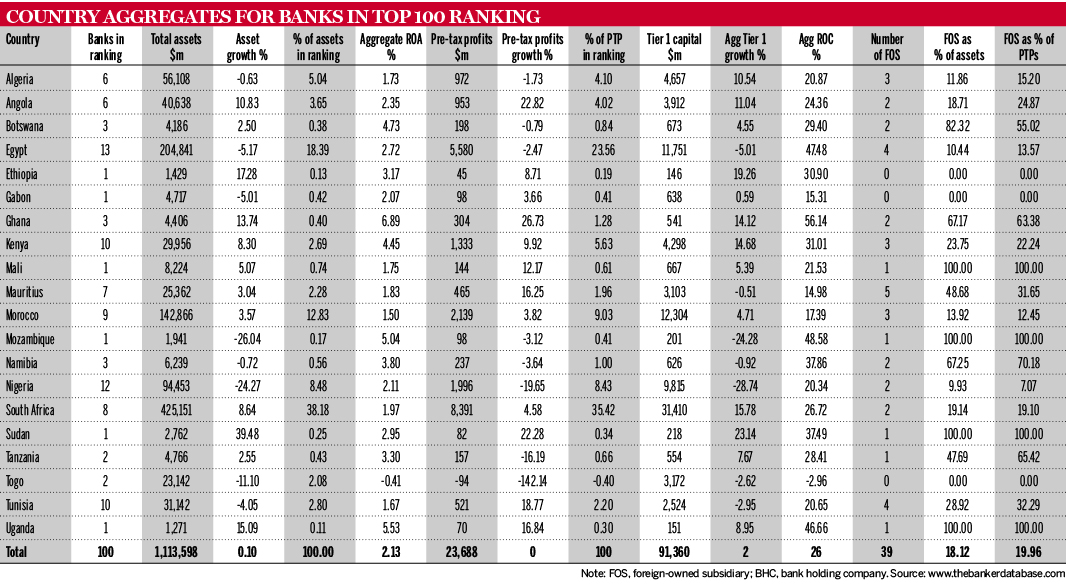